8/02/2019 Headlines, PNG News
EASTERN Highlands Governor Peter Numu has called on the Komiufa landowners planning to shut down the water to follow proper procedures and processes. 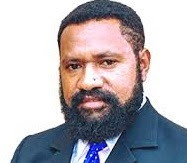 Numu said the landowners have rights to talk about the resource on their land however must follow the right channels in order to receive their compensation claim worth K2.7 million.

He referred to early this year when the issue was brought up, the provincial government made available K100, 000 as “bel kol” money but further stated that he had no idea on how that money was spent.

Numu said if the landowners want to talk, then the state must acquire the land first and then the Lands Department will pay the compensation and the land will now belong to the State.

Numu called on the landowners to understand that there are processes and procedures in place that must be followed and the matter is before the Lands Department now and they will facilitate this matter.

Meanwhile water supply was not disrupted according to news in the media early this week with major institutions and business houses in the provinces reporting that the flow of water supply is normal.
FM100/ONEPNG
SHARE THIS
Share it Tweet Share it Share it Pin it