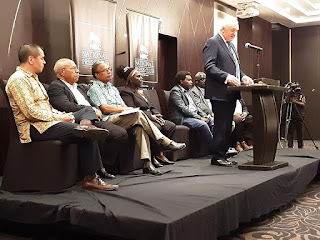 The BRC had been calling for the extension, saying they needed more time to complete the roll.

BRC Chair, former Irish Prime Minister, Bertie Ahern, said the extension will give them time to complete two critical tasks that both the public and leaders have demanded.

He said these are, enrolling Bougainvilleans in hard to reach locations, and extending the public display period to three weeks so Bougainvilleans have time to thoroughly check the preliminary roll ahead of the issuing of writs.

BRC Chairman Bertie Ahern further said they will use the few weeks wisely and are asking for public support to make the Referendum roll as inclusive and trustworthy as possible.

Mr. Ahern reaffirmed the two Government's decision that there would be no further deferments and that the Referendum will be held this year.

He said the revised dates for the Referendum is 27th September for the issue of writs and 23rd November for polling to begin.