7/03/2019 West Papua, World News
A leading West Papuan independence organisation claims to have unified three rebel armies under its control, led by exiled leader Benny Wenda, who says they are now “ready to take over our country”.

However, one alleged party – the long-running domestic separatist group, OPM, – has rejected the announcement as “lies and fabrication”. 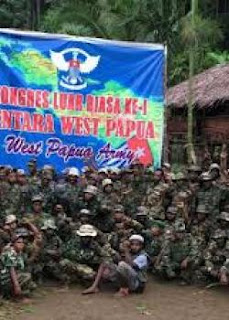 It comes as Indonesian authorities increase efforts in their search for five soldiers and nine crew from a military resupply helicopter which went missing on Friday.

West Papua, which shares an island with Papua New Guinea, has been under Indonesian control since 1969 and is in the grip of a long-running independence conflict.

“Politically and militarily we are united now. The international community can now see without a doubt that we are ready to take over our country,” said Wenda, the chair of the ULMWP.

“Indonesia cannot stigmatise us as separatists or criminals any more, we are a legitimate unified military and political state-in-waiting.”

The groups named include themilitary wing of the OPM, TPNPB, which attacked a construction site in December, reportedly killing 17 Indonesians.

However, in a counter-statement released on Wednesday, OPM leader, Jeffrey Bomanak, said the OPM and the TPNPB “reject and deny the claims made in the political statement on the alleged military merger”.

“[I]t must be stressed firmly that OPM TPN is not part of ULMWP. Starting on 01 July 2019 and henceforth, ULMWP must stop using the name OPM TPN to gain political legitimacy at the international level,” it said.

Bomanak accused the ULMWP organiser of fraud and deception, claiming signatures of regional commanders were fake, and called for an immediate retraction and apology.

Wenda and the ULMWP have been contacted for a response.

TPNPB’s December attack sparked a military crackdown in the region, claiming dozens of lives on both sides.

Shortly after the attack Wenda told the Guardian he could not stop the TPNPB, but called for calm.

Bobby Anderson, Papua researcher and fellow at Chiang Mai University’s School of Public Policy, cautioned that the rebel groups had previously announced unifications which had amounted to nothing.

“This declaration of a unified command might just be the ULMWP trying to grab some of the momentum from the Nduga actions,” said Anderson.

“We won’t know if it’s real until we see coordinated armed actions both in Nduga and beyond, that will demonstrate that the ULMWP declaration is a reality.

“I personally have my doubts. These [armed separatist] factions abound with ‘generals’ who don’t tend to take orders. They operate within limited commands in discrete areas.”

However, Anderson said having the leadership of Wenda might make the difference, and an “unprecedented” unified command would see increased bloodshed.

“He managed to cobble together the ULMWP from civilian representatives of the disparate Papua independence groups and that it’s held this long is impressive.”

The potential unification marks another new development in the long-running conflict, just days after it was revealed West Papuan children have been drawn into the fighting.

TPNPB has acknowledged the presence of teenage and adolescent boys among its ranks, the Associated Press reported last month. On Wednesday the ULMWP had pledged to end the practice, although children would still be trained for combat. However, it is unclear whether the declaration will hold, given the OPM’s rejection of military unification.

The use of children as soldiers is a war crime under international law.

Human rights lawyer Veronica Koman said it was a sign the conflict was far more serious than the rest of the world acknowledged.

“The Indonesian government’s security approach has created an intractable conflict by brutalising generation after generation of West Papuans.”

Reports of military and rebel violence in the region have continued through this year, including claims of the Indonesian armed forces allegedly using white phosphorus, and rebel attacks on soldiers, something Jakarta denies.