Home Headlines Urban News Tallest Building in PNG, the Noble Centre to be completed by December

Tallest Building in PNG, the Noble Centre to be completed by December

6/13/2019 Headlines, Urban News
THE K300 million 23-storey Noble Centre in Downtown Port Moresby is expected to be completed by the end of the year, the developer says. 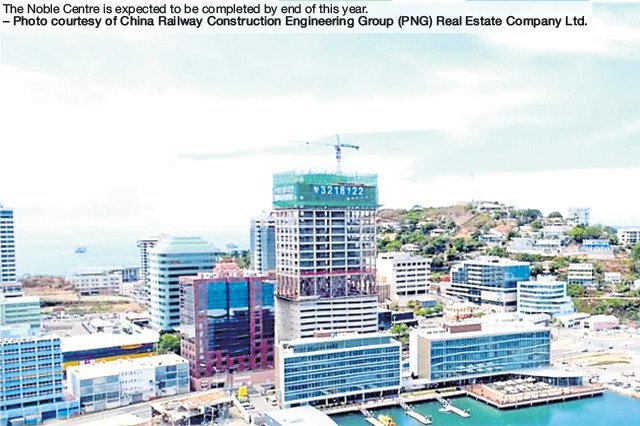 China Railway Construction Engineering Group (PNG) Real Estate Company Ltd deputy general manager Andy Chow said: “There are dozens of entities who showed their interest to the building because it’s the tallest in the country as well as one of the top quality buildings”.
The building has 23 floors along Champion Parade and is the tallest in the country.
The building consists of a dual reception – on ground floor from the Stanley Esplanade and Champion Parade with planned retail spaces.
It has two basements and seven levels of car parking, restaurant on level eight and featured office on levels nine and 10.
Typical office spaces are from levels 11-21.
Level 22 is a planned gymnasium or penthouses with over-looking the Port Moresby Central Business District (CBD).
Major progress so far are as follows:

He said there were still 30-plus office units available for tenants. The total office units 92.
“We welcome all international and domestic companies and individuals to come for site visiting to experience the magnificent harbour sight surrounding,” Chow said. The National
SHARE THIS
Share it Tweet Share it Share it Pin it