6/03/2019 Headlines, PNG News
Three Judges of the National and Supreme Courts of Papua New Guinea have been re-appointed into the judiciary 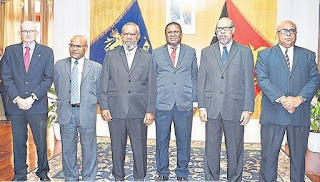 They are Justices David Cannings, Ere Kariko and John Kaumi.

They were re-appointed on May 15 by the Judicial and Legal Services Commission.

They were sworn into office on Friday at the Government House.