5/03/2019 Headlines, PNG News
Public movement will be restricted in Port Moresby, when a police security operation code-named 'Lukautim City' gets underway on Monday.

Deputy Police Commissioner and Chief of Operations, Jim Andrews says extra police manpower will be providing security in the capital city in the lead up to the May Parliament session scheduled to resume on Tuesday May 7. 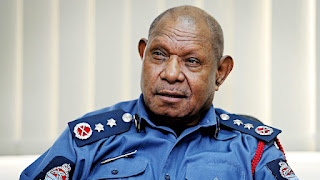 About 1000 officers which includes a 300-men team from the Bomana Police College, personnel from the Police Headquarters, three mobile squads from McGregor Barracks, and the Police Dog Unit will be deployed alongside operational units in the National Capital District to beef up security.

It will remain in force in the lead up to, during and after the anticipated Vote of No Confidence against prime minister Peter O'Neill and his government.

In a statement, Mr Andrews says the operation is to deter opportunists from taking advantage of the situation and creating law and order issues.

Roads leading into and around Parliament are expected to be cordoned off and manned by police when the House is in session.

Mr Andrews says the deployment is deemed as normal police work and no allowances will be paid to officers engaged.