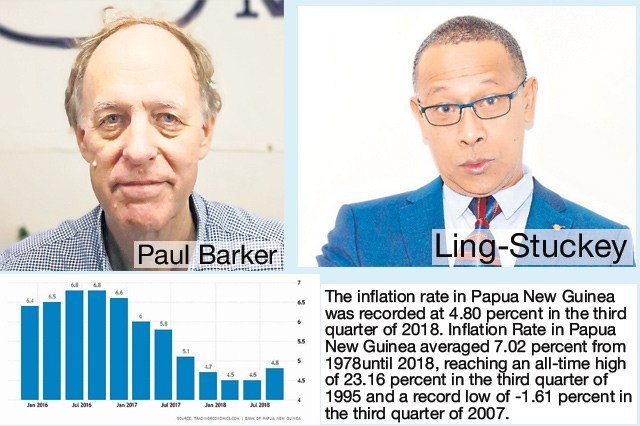 “From 2007-2008, the prices were high, revenue was high, PNG was getting very good revenue. We should already have had a well-designed SWF,” he told The National.
Barker recalls that in the 1990s, PNG had quasi-SWFs through Agriculture Commodity Stabilisation Funds and the Mineral Resources Stabilisation Fund (MRSF).
“The agriculture funds were all there from the 1970s through to the 1980s, when commodity prices went really down. They were all exhausted around 1990-1991.
“They were designed to ensure that when prices went down, there were premiums to be paid out. What we did is we actually borrowed for those funds with the idea of continuing to be able to pay out and then get something back.
“The European Union provided some grant money to help sustain them for a while. The MRSF was a SWF of sorts … which we didn’t manage well because we drew against it. Its stabilisation function was undermined.”

Barker … trust funds poorly managed in the past
Barker said it would have been really good for PNG to have had the SWF in some form of operation from the mid-2000s.
“We would have been able to set aside, some of the ‘windfall revenues’ from the very high commodity prices in 2007 and 2008 … therefore be able to stabilise expenditure. But we didn’t. We put it into many little trust funds, and of course, the rest is history.
“We had all those trust funds … but because the supervision, planning and design of those trust funds were not good, inevitably, there was a lot of abuse.
“In many of those trust funds, the money shifted from the trust funds into other accounts, and the accountability really wasn’t there. Much expenditure occurred.
“There is something called the Santiago Principles and all resource-rich countries with SWF interests came together with organisations like the International Monetary Fund (IMF), the World Bank and others to talk on how best to be prudent and competent to manage natural resources and wealth,” he added.
Barker said while the Treasury and the central bank wanted the SWF to be in place with the laws as mentioned in Budget 2019, there was no revenue.
“We’re still borrowing money under the sovereign bond, treasury bills and so on and so forth. But you could have a bonanza.
“It’s still possible that you could have a conflict in the Middle East, insecurity of supply, a cold winter comes and everyone needs a lot more power.
“Suddenly you can have a big increase in oil and gas prices. You need then to have the SWF in place, functional, and a portion of those funds being set aside.
“Obviously, you’ve got to first of all pay off some of your existing debts, in accordance with debt management plans.
“You don’t want to miss out on the scenario of 2006, 2007, 2008 when prices shot up. You want to capture some of the revenue from that and set aside for the future.”
Barker admitted that he was “not totally confident” about the success of a SWF in PNG. Two smaller countries in the Pacific – Nauru and Kiribati – have SWFs built up from phosphate mining.
“While Nauru has mismanaged its SWF, Kiribati has prudently managed its fund and is now benefitting, while the larger PNG has nothing to its name.
“As I said, in the 1990s we had many new resource projects, and we had a MRSF. Two years after Kutubu oil commenced (in 1991), we had a balance of payments crisis, a fiscal crisis, a big devaluation, we had all these crises.
“We had to go and get the IMF and everyone to come in and bail us out, have a structural adjustment programme. We stabilised things a bit. Then things went chaotic again. “That time PNG had friends – Australia, World Bank and others – who assisted by providing credits to help stabilise things. In the 1990s, although we had Kutubu Oil, Lihir and all these projects, including Ok Tedi and Porgera.
“We were overspending, we were being unrealistic. By the mid to late 1990s, we didn’t have the funds to recruit young teachers and nurses. We had a lot of crises then. Past experience wasn’t that great,” he said.
Barker said the Government in recent years had been spending rather than saving, “which is a cause for concern”.
It is all the past experiences that make Barker not too confident about a SWF in PNG.
Ling-Stuckey … PNG needs a robust and transparent SWF
Shadow Minister for Treasury and Finance Ian Ling-Stuckey says PNG needs a robust and transparent SWF.
Ling-Stuckey said: “The booms-and-busts of the resource sector have damaged our economy for too long.”
“There are ways that can minimise these damages by smoothening the ups-and-downs of revenue and foreign exchange flows from resource projects.
“One effective way is to have a good SWF. This can help save excess revenues in boom years and then release the funds in years when commodity prices and revenues are low.
“However, and this is a very major condition, any SWF must be robust and transparent. There are good SWFs, and there are bad SWFs.”
Ling-Stuckey added that SWFs, where political leaders can raid PNG’s resource flows and divert the money, should not be the case. “PNG has been burnt in the past through the abuse of PNG’s first so-called SWF.
“While this fund worked well initially, it had a loophole that meant its funds were raided in the late 1990s. We should never make this mistake again.” Ling-Stuckey said Prof Satish Chand, writing for the National Research Institute, had highlighted “serious defects” in the SWF passed by Parliament in July 2015.
“Chand concludes that ‘the withdrawal formula fails to achieve the stipulated aim of macro-economic stabilisation and could do the very opposite’. “He also concludes ‘the opaqueness of the formula for withdrawals from the SWF is at the cost of transparency that is necessary for public scrutiny’. “These are major defects of the current SWF that (Prime Minister Peter) O’Neill is so keen to put in place but could do more damage to PNG than good.
“The fund allows Kumul Petroleum Holdings Ltd to retain half of the dividends and other moneys from the PNG LNG project and any future Papua LNG project.
“These funds don’t come into the budget process. Unfortunately, the revised SWF pushed through by O’Neill allows for him to divert funds away from budget priorities such as health, education and infrastructure.
“This was highlighted as a major concern in earlier analysis by the National Research Institute and other independent observers,” he added. Statement/TheNational/OnePNG
SHARE THIS
Share it Tweet Share it Share it Pin it