4/29/2019 Headlines, Pacific News, Solomon Islands News
The Democratic Coalition for Advancement Government (DCAG) is still to make a stand to switch from Republic of China (Taiwan) to China. 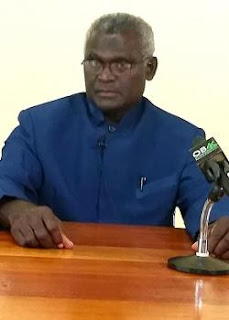 This came after a lot of talks that Solomon Islands may switch diplomatic ties from Taiwan to China.

Newly elected Prime Minister Manasseh Sogavare told the media recently that a decision on this diplomatic switch can only be made through discussion within the coalition.

Sogavare said at the moment the status quo is still being maintained.

He said this is something they will continue to develop and see how they benefit from the relationship.

“At this time, there’s nothing in place. We are aware, so many talks are going on, we will discuss through coalition and see the position of new government at an appropriate time,” he said.

Solomon Islands has diplomatic relations with the Republic of China (Taiwan) since 1983.

On the other hand, Sogavare said he still maintains his stand as former chairman of Melanesian Spearhead Group (MSG) for the rights of West Papua.

He said MSG is fighting for the rights of Melanesian states.

“As we know New Caledonia is still going. At the end of the day, if people of New Caledonia decide to stay with France, so be it,” he said.

Sogavare said this is same with West Papua, if Melanesians rights are respected, so who are we to talk about rights of West Papua.

“Unfortunately, that’s not the way in West Papua, atrocities are still committed there.

“It was a sad story that 600,000 Melanesians died when they wanted to talk about their rights and were suppressed,” he said.

However, Sogavare said if the MSG approach hits a brick wall, then there should be a friendly approach to address issues with West Papua.

“We need to actively engage with Indonesia.

“I had a call with Indonesia Embassy in Port Moresby. Iam looking forward to the friendly dialogue, consultation and talk about these issues as friendly neighbour that we have in our region,” he added.