4/26/2019 Headlines, PNG News, Urban News
PORT MORESBY: If we cannot get the basics right, the bigger challenges of managing our nation and securing a better future will continue to be a rocket science for everyone, NCD Governor Powes Parkop says. 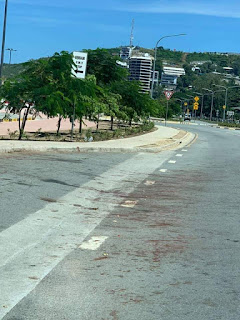 Mr Parkop said PNG and its future cannot be greater without her people overcoming these simple basic challenges.

“How can we take care of our families, country and future, if we can’t get these basic rights?

Governor Parkop was speaking after launching a clean up initiative to remove betel nut stains from City roads especially at road Junctions, traffic lights and bus stops. He expressed utter disgust at the impunity in which betel nut chewers are spitting all over the City.

“Apart from generating income in an easy way and making chewers or addicts feel good in some ways, betel nut vending and chewing causes more damages to us than good! It causes health problems, promote unhygienic habits, and promote poor values and causes rubbish and ugly sights in our communities and cities,” he said.

“They just spit anywhere at time! Some spit on other people’s properties, spit in front of other people, spit or stains are caught in their shirts or clothes and they just spit out of PMVs and their cars at any time, at any place in the City, for example. If one looks around at most of our street junctions, traffic lights and bus stops, you will see them littered with red betel nut stains. It’s become so common again we have become blind to our poor habits and poor value system!” a very concerned Parkop said.

Vendors too have no respect for the City, he said, adding they trade anywhere they like and allow their clients to chew and spit anywhere leaving the rubbish for others to collect or clean up!

“As long as they got their money, vendors and chewers have no regard and care at all of the consequences of their habits and bad behaviour. This bad habits and behaviour do not stop there. When you can spit anywhere at any time, nothing is sacred anymore! Littering and graffiti becomes ok or normal! No one sees littering and graffiti as bad or ugly anymore! If you graffiti on someone else or public property, it’s ok because we all have spitted betel nut spittle on those properties already. We give allowance for more bad habits and behaviour,” said Governor Parkop.

Last night, Governor Parkop led a team at Era Kone (formerly known as Ela Beach) and started cleaning the streets of betelnut stains to try and keep that beautiful and peaceful hub of the City as good as possible for all the residents.

“We will now start going around the City to clean the filth of our people. Another waste of public funds but we have no choice! We have been working with police and magisterial services to put in place a prosecution and Magisterial stream dedicated to the City. Once this is in place, we will start arresting and prosecuting irresponsible vendors and chewers soon. Parliament has already passed the law! We are now building the capacity for enforcement,” he warned.

He also warned that he will not discount the imposition of the betel nut ban again saying if people cannot be responsible then they should be stopped from enjoying such freedom. Freedom comes with responsibility he emphasized.
SHARE THIS
Share it Tweet Share it Share it Pin it