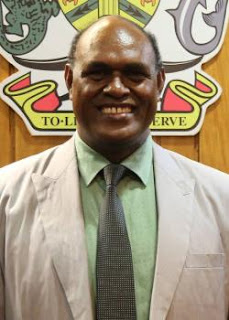 1. John Maneniaru who is the Deputy Prime Minister and Minister of Fisheries and Marine Resources;
2. Jeremiah Manele – Minister for Foreign Affairs and External Trade;
3. Harry Kuma – Minister for Finance and Treasury;
4. Lanelle Olandrea Tanangada –Minister for Police, National Security and Correctional Services and
5. Fredrick Kologeto who took up the Ministry of Public Service portfolio

The five ministers have taken their oaths before Governor General Sir Frank Kabui.

Former Prime Minister, Rick Houenipwela has missed out on the Finance Portfolio.

Maneniaru said the Prime Minister had talked with Hou and Kuma and party wing leaders to have understanding over this appointment.

He said the PM will come up with a tentative list tomorrow for the other 18 ministries.

Meanwhile, the Government has further extended the current liquor ban to April 27 after violence marred the election of Prime Minister on Wednesday.

The Order has directed that all liquor licensed premises including bars, night clubs and bottle shops in Honiara and Guadalcanal Province must not sell liquor and must be closed on April 26 and 27 respectively.

The order further directed that liquor sold or supplied under the above circumstances must not be consumed or taken outside of the hotel or licensed restaurant premises.