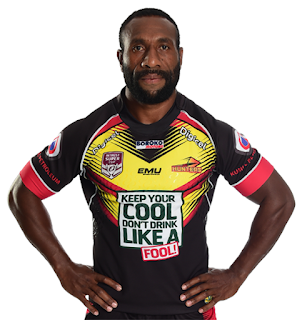 PNG Hunters team has named Adex Wera as its skipper for 2019.

Wera was surprised on receiving the news from coach Michael Marum before the official announcement was made at the Hunters 2019 season launching at Oil Search National Football Stadium in Port Moresby on Friday.

Wera will be supported by vice-captain Moses Meninga.

Wera will play his 101 game in the Hunters opening match against Tweed Heads Seagulls at Piggabeen Sports Complex on March 10.

Wera, who is Hunter number six, is a utility back who has scored a total of 53 tries with a record 212 points according to the Hunters 2014-2018 records.

Wera is also a skillful player in the team who can step up to the scene when the team looks for that extra spark given his speed, footwork, ball handling and try scoring abilities.

His announcement as team captain was also backed by new recruits Jerry Teme and Daniel Tapol.

Tapol, on his first appearance to train with the team, said Adex and Meninga have been supportive towards the new recruits and they possess the leadership roles.