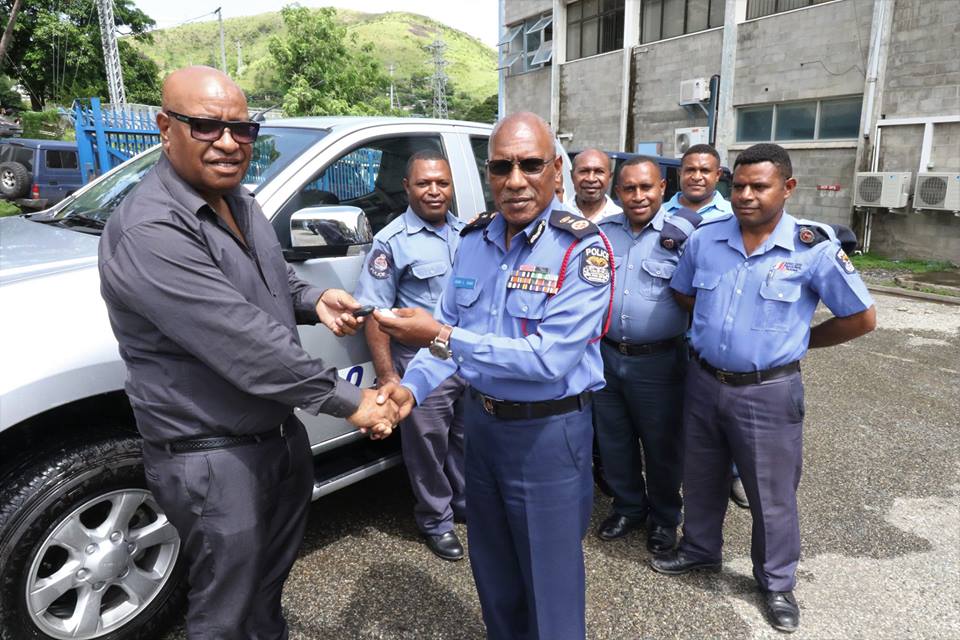 POLICE Commissioner Gari Baki last week handed over the keys to a brand new vehicle to the Gordons Minor Crimes Unit.
The vehicle was donated by Port Moresby based wholesale company Choulai Trading Company in appreciation for the efforts of the Policing the Police Task Force Team (PPTFT) in recovering 76 of the 150 boxes of cigarettes stolen from the company whilst in transit.
Commissioner Baki in handing over the keys to Senior Sergeant Apollos Terry, Officer in Charge of the Gordons Minor Crimes and head of the PPTFT, encouraged the team to continue the excellent efforts to date.
Mr Baki urged the team to take care of the vehicle so that it will assist them in the discharge of their policing duties.
The vehicle was donated to the Police Department about two weeks ago and was given a government number plate and badged with the police logo. A spokesman for Choulai Trading Company said during the presentation that the company is appreciative of the efforts of police and decided to donate the vehicle which will help a wider community.
“I must commend the policemen who refused to accept the K100,000 cash reward which we offered and this gives us great confidence in the Police Force. Businesses and people in PNG will flourish and prosper if the law is strong and the police are effective,” the spokesman said.
Commissioner Baki thanked Choulai Trading Company for its generosity. He said he had made the decision to present the vehicle to the Gordons Minor Crimes which does not have a vehicle at the moment but have performed exceptionally well thus far.
(Ends)
(Photograph and caption below:)

Police Commissioner Gari Baki (right) handing over the keys to the donated vehicle to Detective Senior Sergeant Apollos Terry (left), Officer in Charge of the Gordons Minor Crimes Unit and head of the Policing the Police Task Force Team (PPTFT). Looking on are some of the members of the PPTFT.
SHARE THIS
Share it Tweet Share it Share it Pin it