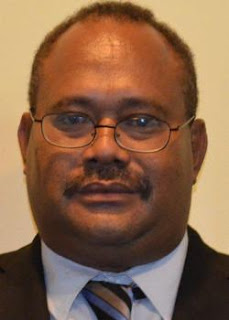 Gao Bugotu MP Samuel Manetoali’s bid for a fourth term in parliament suffered a huge blow last Friday after Police arrested and charged him with one count of conversion.

Manetoali, who has served his constituency for the last three consecutive terms, and is currently the Minister for Forestry and Research, is accused of converting SBD$100,000 (US$12,468) of constituency funds to pay for a Christmas party he hosted in 2014.

His surety also signed a principal bail of $5,000.

Police alleged that around mid-December 2014, the newly elected DCC Government made a Cabinet decision to advance a grant of $100,000 to each of the 50 constituencies.

It was alleged that on 24 December, the amount of $100,000 was paid to Gao/Bugotu Constituency through SIG ANZ cheque and was processed by the Ministry of Rural Development (MRD).

It was further alleged that Manetoali signed out the cheque at MRD on 24 December 2014 and handed it to his CDO at that time.

His CDO cashed the cheque and handed $100,000 to the accused who then on 25 December 2014, allegedly spent the money for a Christmas party which was held at his then Lengakiki residence.

Public Prosecutor Jasper Anisi told the court on Friday police investigations into the matter has been completed.

Amos Ngaingeri of L & L Lawyers, who represents Manetoali, said if that is the case then his client will be ready to take his plea on Monday.

Chief Magistrate Emma Garo ordered for disclosures to be provided to the defence counsel by Monday next week, and adjourned the case to December 28.

Assistant Commissioner (AC) Crime and Intelligence, Ian Vaevaso said Manetoali’s arrest is a result of hard investigative work which has been ongoing for a long time.”

“I would like to thank my officers for their hard work, and the Office of the Director Public Prosecution for offering legal advice to my investigators,” AC Vaevaso said.

Garo also ordered Manetoali to surrender his ordinary passport to the court.

Other bail conditions are: he is not to travel outside of the country without the court’s permission, he is to report to China Town Police Post twice a week commencing December 17 and he is not to interfere with five of Crown’s witnesses whom their names were provided to the court.