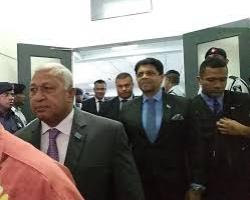 Fiji's Court of Disputed Returns comprising Justice Anjala Wati  and Justice Kamal Kumar will deliver a ruling this afternoon regarding the petitioners’ application to have oral evidence heard.

This is in the case of SODELPA leader Sitiveni Rabuka and National Federation Party leader Biman Prasad who have filed an election petition against the 2018 General Elections results.

The Court will also be fixing the date of the hearing.

Filimoni Vosarogo who is representing Mr Prasad and Mr Rabuka with Jon Apted and Simione Valenitabua confirmed to the Court that they have received the answers to the petition and affidavits in reply from the respondents.

The respondents in the matter are the 27 FijiFirst Party Parliamentarians, Former FijiFirst MP Faiyaz Koya and the Supervisor of Elections.

Vosarogo said they would like to call oral evidence of eight witnesses and asked the court’s direction on whether they have permission to call them.

Devanesh Sharma who is representing the 27 respondents, the Attorney-General and the Former FijiFirst MP Faiyaz Koya opposed the application made by Vosarogo.

Solicitor-General Sharvada Sharma who is appearing on behalf of the Supervisor of Elections highlighted that the court has 11 days to decide on the matter and give a ruling on three petitions.

He added that they also oppose oral evidence.

Nilesh Prasad who is representing the Electoral Commission said that the application to call oral evidence must be declined.

He adds that the flood gate of hearing oral evidence must be closed as the other petitioners in the two other election petitions before the Court may make similar applications.