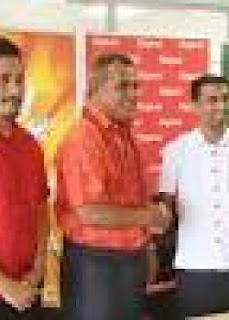 Digicel Samoa were announced as the official sponsor of the Samoa 2019 Pacific Games at their head office in Apia.

The official sponsorship package is valued at $3 million Tala (US$1.1 million), entailing both cash and broadcasting and communication services.

Falefata said this was a big milestone leading up to Christmas.

“It means we can start looking to next year and all our other preparations.

“Getting most of the rest of our sponsorship deals locked in by the end of the year, making sure our venues are still on track which they are, and finalising the accommodation.

“It’s been a long time with the negotiations, making sure we ticked all our boxes.”

Mohammed joked that Falefata and his team had been keeping him up late at night getting the deal over the line.

“In any sponsorship negotiation there’s a lot that needs to be covered in terms of what we bring to the table, and what benefits we’ll get back from it,” he said.

“We were also in the process of a lot of network upgrades and stuff, so that took a lot of my personal time away from building what we need to for the Games, in terms of the digital experience.

“I’m absolutely delighted to be able to close the deal this side of Christmas, so we can all focus on the activation and execution of the sponsorship.”

Falefata said things would now start to open up in terms of preparations now with more funding locked in.

Earlier in the week he told the Observer they have had to be frugal with their spending.

“Hence why we have a lot of volunteers on board,” he said previously.

“We’ve asked some of our donor partners to help with our personnel,” he said.