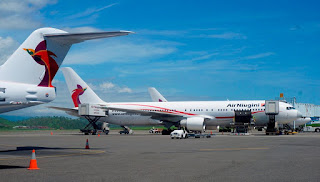 The Bougainville Government has asked the National Airports Corporation for time to address law and order issues that could lead to the indefinite closure of Buka Airport.

Bougainville Chief Secretary Joseph Nobetau was served the seven-day notice last Friday over issues relating to airport security, and law and order, including thefts airport fencing materials and an unwillingness by former landowners to allow the fencing to proceed.

Nobetau said that it was in the people’s interest not to close the airport tomorrow as planned and he had appealed to the landowners and stakeholders to adhere to meetings called forthwith.

The NAC had told Nobetau in its letter last week that the lifting of the impending closure would depend on the Bougainville Government resolving the law and order issues with the former landowners.

North Veterans head Damien Kora said last night they had addressed these issues and agreed that there would be no more protests to the National Government. He also said that they had cleared the service providers’ issues would pave way for law and order to be addressed amicably.

There were plans to lock Bougainville President John Momis, Vice President Raymond Masono, Chief Secretary Joseph Nebetau and two other officers at midnight last night – but the plans were later aborted following the “satisfactory meeting” between the veterans and the Bougainville Government leadership.

A team had been set up to address also the issues highlighted by National Airports Corporation and had been in constant communication with the NAC headquarters.