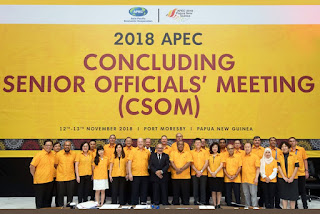 Senior officials from the 21 APEC economies have commenced policy deliberations in Port Moresby to continue to build common ground towards advancing regional economic integration and connectivity, digital entrepreneurship and market access for businesses of all sizes.

The 12-13 November proceedings will be followed by the APEC Ministerial Meeting on Thursday, and culminate with a meeting of APEC Leaders on Saturday and Sunday, chaired by Prime Minister O’Neill.

“This has been a long road for a small economy like ours,” Prime Minister O’Neill said of hosting APEC in 2018.

“Policy discussions are going well. I look forward to receiving them with the Leaders over the next few days,” he told senior officials at their meeting.

This week’s meetings aim to provide greater policy direction in APEC for delivering trade that harnesses new, technologically-driven growth drivers, sparks business innovation and employment, and brings better quality of life to people in all areas of the region.

Under the theme “Harnessing Inclusive Opportunities, Embracing the Digital Future”, they come at a time of global economic uncertainty. The APEC region accounts for half of global trade and 60 per cent of world GDP.

“We meet during a very crucial period, both globally and regionally, amidst economic uncertainty and other challenges that threaten the economic prosperity and integration and stability of our region,” said Ambassador Ivan Pomaleu, 2018 Chair of APEC Senior Officials.

“While this uncertainty, on the face of it, may appear to some to suggest disunity or disharmony, in my view, it demonstrates to us the heightened need for us here today to stand in solidarity and be more strategic in how we respond to these challenges and identify and harness the opportunities in a productive and inclusive manner where all economies can benefit,” he told officials.

An APEC report tabled at the meeting highlights the need for increased investment in infrastructure throughout the region, especially in the transport (road and rail), energy and telecommunications sectors.

Quality infrastructure investment supported economic growth, in terms of improving productivity, speeding up the flow of goods and people and thereby trade, and improving delivery of health, sanitation and other essential services. It also supported inclusive growth by helping to reduce poverty and connecting remote regions.

Many economies are undertaking structural reform of their policies to ensure ongoing quality infrastructure development, including changes to legal frameworks and government procurement practices to facilitate private sector investment.

Other reforms under way include deregulating network industries, adapting regulatory systems in light of technological change and reforming institutions such as state-owned enterprises and infrastructure funding models.