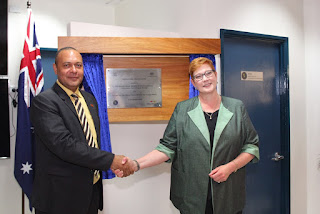 Papua New Guinea now has a state-of-the-art National Cyber Security Centre to protect its digital assets from threats in cyberspace.

In the near term, the Centre will play a key role in securing the APEC Leaders’ week in Port Moresby. In the longer term, it will enable Papua New Guinea to build its digital economy from a strong and secure position.


Minister Payne was pleased that the project would support Papua New Guinea’s longer term aspiration of economic growth in the 21st century, with potential benefits for all Papua New Guineans.

"Robust cyber security is a fundamental element of growth and prosperity in the global digital economy,” Minister Payne said.
Working with Papua New Guinea to strengthen cyber security on the region is an important component of Australia’s broader support to PNG’s digital sector, which also includes the Coral Sea Cable project. This investment aims to see Port Moresby and Sydney connected by a new fibre optic cable by late 2019.

Australia and Papua New Guinea are committed to working closely together to protect our shared interests in cyberspace......read more on PNG Technology Site : PNG eHow