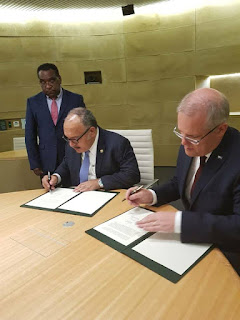 Papua New Guinea Prime Minister,  Peter O’Neill  has met with his Australian counterpart, Prime Minister Hon. Scott Morrison MP, to advance a number of bilateral initiatives.
The Prime Ministers discussed bilateral relations and agreed to work together to improve and strengthen engagement between both countries.
"Scott Morrison and I agreed that part of our strengthening of relations would be to hold a Leaders Summit on a Annual basis.
This will be held alternatively between cities in both countries.
“Joint security strengthening and capacity building is an important part of our engagement.
“We have agreed to continue with the Australian Federal Police programme but with some refinement, particularly with a focus on frontline policing.
“An important initiative will be to establish a Joint Naval base in Manus.
"This will provide economic security and surveillance around our vast maritime areas, as well prevent illicit trading, drug smuggling and fishing."
"As we prepare for the APEC Summit this month, we have agreed to advocate climate changes issues during the Leaders’ meeting along with Australia's committed to its emission targets.
“Prime Minister Morrission said he is looking forward to visiting Papua New Guinea for APEC and will use the opportunity to engage with the people of our Nation and Pacific Leaders."
In relation to the the development program with Australia, PM O’Neill said there will be a strengthening of engagement in targeted areas.
“We have agreed to refocus partner support on key infrastructure projects, roads, communication, energy or power supply.
“This will strength the Government's economic and social agenda, and enhance the quality of life in our country."
In the meeting Prime Minister Morrison congratulated the Papua New Guinea Government on its first successful sovereign Bond that demonstrates markets confidence in the Government’s leadership and economic management and performance."
Prime Minister Morrison further invited Prime Minister O’Neill to Australia next year for a State Visit.
SHARE THIS
Share it Tweet Share it Share it Pin it