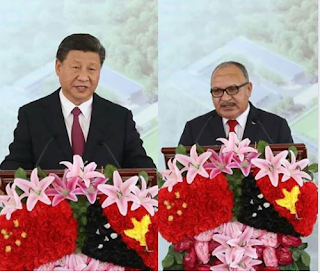 Chinese Ambassador Xue Bin says President Xi Jinping’s visit last week, and the hosting of the Apec meetings by PNG were a success.
He made the statement during the signing of a joint venture agreement between PNG, Thailand and China of a K3.4 billion project to develop an integrated agriculture business in the Abau district of Central.
“President Xi’s visit was the first for a Chinese head of state (and it) achieved a lot of good results,” he said.
“It will bring benefits to the people of PNG as well as the people of China in the long term.”
He also hailed the hosting of the Apec meetings as a success for PNG.
“It’s a first time for PNG to host such a large gathering of the most influential world leaders. Of course, some say because there is no declaration, the meeting was a failure. But it was not true,” Xue said.
“People have their different views on the world economies, especially on the reforms by the World Trade Organisation system. Of course, the US has its own opinion and China has its own opinion.
“But I want to give credit to Prime Minister Peter O’Neill for his strong leadership as the chairman of Apec.
“He played a pivotal role to ensure a smooth running of the Apec meeting.
“And today’s project will also benefit the people and it will create a lot jobs and boost the economy in the long-term.” He said PNG had already signed several agreements with China and other countries. The National/ONEPNG
SHARE THIS
Share it Tweet Share it Share it Pin it