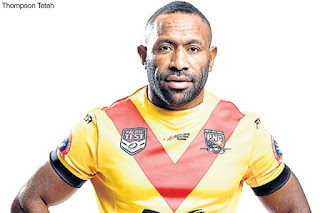 The  Featherstone Rovers have signed PNG international Thompson Teteh, , for next season.
The 29-year-old centre was part of the Kumuls 2017 World Cup squad and PNG’s gold medal winning rugby league nines team at the 2015 Pacific Games.
Teteh is a former teammate of fellow Rovers signings Ase and Watson Boas at both international level and for the PNG Hunters.
He has also appeared for Queensland Intrust Super Cup outfit Redcliffe Dolphins.
“We are delighted to have brought Thompson Teteh in for the 2019 season,” Rovers general manager Davide Longo said.
“He is a player we have been monitoring for a couple of years and has received attention from a number of Super League clubs.
“Alongside Ase and Watson, he will add an element of international class to next year’s squad.
“He is an exciting and powerful player, who has experience at the highest level.” Longo feels that the Featherstone’s latest signings have put the club in a strong position heading into next season.
The Rovers general manager has promised more additions before next year’s campaign.
“The addition of those qualities, added to the championship exposure of our recruits from Batley and the enthusiastic hunger of the academy stars we’ve signed, means our team for next season is striking the perfect balance,” Longo said.
“We are not content yet though and will make further additions ahead of 2019.” – DailyMail
SHARE THIS
Share it Tweet Share it Share it Pin it