Sir Michael reminds Bougainvilleans their fate in their hands 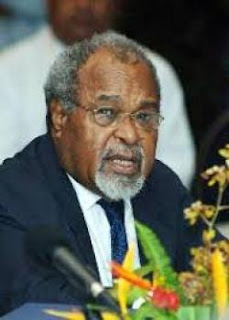 The decision which will decide the fate of the Autonomous Region of Bougainville rests solely with the people of Bougainville, says former Papua New Guinea Prime Minister Grand Chief Sir Michael Somare.

He told the people of Bougainville in Buka Town that 06 June next year would be the time to choose whether to remain a part of Papua New Guinea or become an independent nation.

“You have a very experienced leader and statesman in President Dr John Momis who will lead you in the right direction. You must be grateful that he is the one leading you. So you must support him,” he said.

“Prior to PNG’s independence, your president and I travelled throughout the country to gauge the views of the people on our path to eventual statehood.”

He said it was a difficult journey but independence was achieved with the support of Momis, the late Sir Paul Lapun and the late Sir Donatus Mola. The people of Bougainville thanked Sir Michael for his services to the country.

He thanked Bougainville for supporting him and the late Sir Paul, the late Sir Donatus, the late Raphael Bele and Momis for their immense contribution to the development of Papua New Guinea.

“President Momis played a vital role in shaping this country through his commitment to developing a home grown constitution as the defacto chairman of the Constitutional Planning Committee,” he said