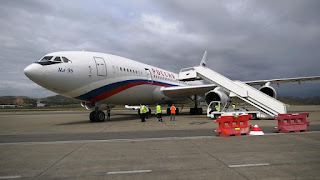 With only 20 days remaining for the arrival of the APEC Leaders from its 21 economies, preparations are at their peak for both the host Papua New Guinea and the visiting delegations.

Several of APEC's larger economies have indicated making their flights to Port Moresby.

Russia was the first to make the test flight to Port Moresby to check out the facilities at the Port Moresby International Airport.

It's Ilyushin Il-96 aircraft made its maiden flight to Port Moresby via Ho Chi Mihn City in Vietnam yesterday.

The Ilyushin II-96 is the Russian presidential aircraft used by the President of Russia and other government officials, and is operated by Rossiya Airlines.

On hand to receive the delegation were the senior officials from the National Airports Corporation, including the Chief Operating Officer, Rob Parkinson.

Mr. Parkinson said, "this is a Russian Ilyushin 96 aircraft. It's flown all the way from Russia here, via Ho Chi Minh.

"It's here to do a trial for the APEC because when APEC's on Russia will be bringing their leader, on this particular aircraft.

"And so they want to see where they going to park and look at the terminal to see the facilities they'll use and also look at the ground handling equipment we have here."

From the developments taking place at the Jacksons Airport, it can cater for up to six aircrafts of the same size as the Russians aircraft.

NBC News is also aware that the aircraft which the Chinese President, Xi Jingping, will be using to fly to Port Moresby will be bigger than the rest that will be coming for the APEC Leaders' Summit.