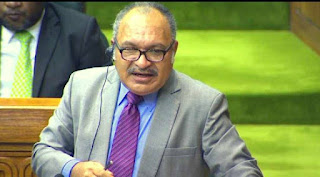 Papua New Guinea Prime Minister Peter O’Neill has confirmed that all 40 Maserati executive vehicles will be sold to the private sector in a public tender.

This will be conducted in a transparent process right after the APEC Leaders’ meet.

PM O’Neill said the Government is doing nothing secret but is prepared to host a successful APEC Summit next month.

The PM went further and said there have been no cuts to our health budget as speculated but in fact, we are increasing spending to combat the polio outbreak.

PM O’Neill said the Government is also increasing awareness that parents must allow their children to be immunised early to avoid such diseases.

He added that like all previous events hosted by governments in the past, all vehicles will be sold to the private sector in a public tender.

The PM stated that all APEC hosting nations, including Australia, have provided appropriate standard vehicle for all leaders in the past.

PM O’Neill reiterated that it would be inappropriate for us to transport leaders in Landcruisers.

One Nation Party Leader and Queensland Senator, Pauline Hanson, said she was furious with the Government of PNG on the purchase of the 40 Maserati vehicles from Italy, and called for the withdrawal of Australian Aid.