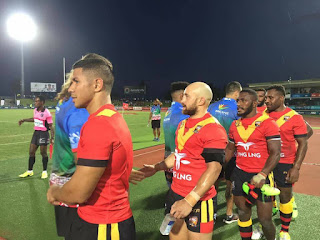 Tickets for the first of the two game International series next Saturday (October 27) between the PNG LNG Kumuls and England Knights in Lae will go on sale next Monday October 22, 2018. PNGRFL CEO Reatau Rau said the tickets will be on sale from 9am on Monday at Andersons, Eriku and Foodmart in Town. He added Brian Bell Homecentre at Lae Market will be confirmed by tomorrow.

He said the cost per ticket is K50. “This covers all the stands and the grass areas at the Lae Rugby League ground,” Rau said. He added the cost covers everybody from young to old. “Every person that enters the ground, whether a child or adult must purchase a ticket. There is no separate price for children,” Rau added.

He said this is the first appearance for the PNG LNG Kumuls in Lae since 2014 and the first time an International team is touring the country after more than 15 years or so therefore we believe K50 per person to host the game in Lae is affordable,” Rau said.

He urged the public to buy tickets early as there will be no sales on game day on Saturday. Gates at the Rugby League grounds will open at 9am on Saturday October 27, 2018. The curtain raiser will be an Under 20’s match which kicks off at 12.15pm. The International fixture between PNG LNG Kumuls and England Knights kicks off at 3pm.
SHARE THIS
Share it Tweet Share it Share it Pin it