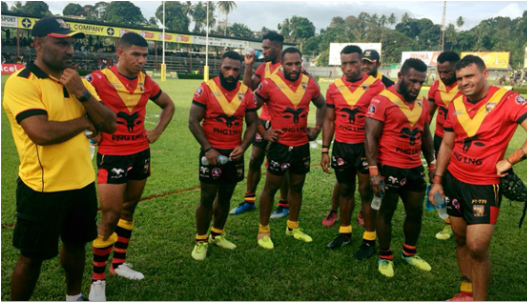 The England Knights have held off a disappointing Kumuls outfit to claim the first of the two match series 16 – 12.

Three unconverted tries was the difference as the Knights held onto its first half lead to beat the Kumuls at the Lae Rugby League Grounds.

The Knights held onto an eight-point lead in the first half to come out victors in hot and humid conditions.

Brendan Nima opened the scoring in 13th minute when Nene McDonald tapped back after a Watson Boas fifth last kick to Nima to score in the right corner.

The Knights hit back in the 21st minutes through a try to Liam Sutcliffe following a penalty against McDonald for a dangerous play. The Knights converted for a 6 – 4 lead.

After a Knights player was taken out of touch in the ensuing play from the kick-restart, Edwin Ipape, would take on the line and put through Moses Meninga to score beside the post.

Watson Boas however failed to convert from in front leaving the scores at 8 – 6.

The Kumuls would mount pressure however the Knights were up to the task.

And after Radley Brawa dropped the ball in the Kumuls 20 metre, the Knights wasted no time and scored through Tom Lineham after Kumuls ran out of defenders on the left flank.

The conversion missed with the Knights going back in front by 10-8.

The Knights showed their class against when a 40-20 kick found its mark and in the ensuing play Tom Davies, would stroll over in the right hand corner. A successful conversion extended their lead to 16 – 8 to close off the first half.

The Kumuls started strongly in the second half and opened the scoring through Edwin Ipape would score off a Justin Olam run in the 50th minute.

The humid conditions played a part as the Kumuls failed to mount anymore pressure against the Knights as they held on the last 30 minutes to win the match.

Kumuls Assistant Coach, Stanley Tepend, said after that too many errors cost them the match.

He said they will work hard to bounce back from the loss.