9/20/2018 Headlines, Pacific News
All Blacks star Sonny Bill Williams, whose father is Samoan, has hit back at Newstalk ZB presenter Heather du Plessis-Allan after her controversial on-air comments on the Pacific Islands.

Earlier this month, Newstalk ZB presenter Heather du Plessis-Allan told her listeners it was not worth the expense of sending the PM to the Pacific Islands Forum in Nauru. 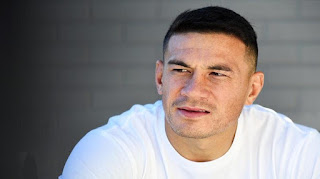 "The Pacific Islands wants money from us," she said.

"The Pacific Islands don't matter. They are nothing but leeches on us."

Her comments were posted on social media, prompting lots of angry reactions and some abusive and offensive putdowns of the broadcaster herself.

Williams posted on Twitter last night that he was "disheartened" by the "bigoted" comments.

"I don’t [sic] care what the "context" was - calling Polynesians 'LEECHES' is not okay - period," he wrote.

"How far can you take offensiveness and utter stupidity?" he wrote.

Ms du Plessis-Allan later invited Privacy Commissioner John Edwards onto her show to debate the issue. He declined and she hit out.

"Go back to university and do some more training. You are not good enough."

She said Mr Edwards' reaction was symptomatic of intolerance on the political left.

"They are like all deep-thinking and progressive but the moment someone says something that they don't want to see the nuance in, they just take the broad brushstrokes of something."

Ms du Plessis-Allan also insisted on air that she had not "dehumanised" or insulted anyone, she had commented only on Pacific Islands' governments.

"I will double down on this. I do not regret what I said because I was not talking about people living in this country or the people themselves. I was talking about the Pacific Islands and the people who run it [sic]," she said.

"Now that the phosphate dust has settled and the shameless self-promoting headlines about the Pacific being 'leeches' and a waste of time and money have lost their hysterical edge - let's take a look at some facts," she wrote on the TVNZ website this week.