9/05/2018 Headlines, Sports
THE SP PNG Hunters are set to lose their two main playmakers in captain and five-eighth Ase Boas and halfback brother Watson who have signed with English second division club the Featherstone Rovers for next season. 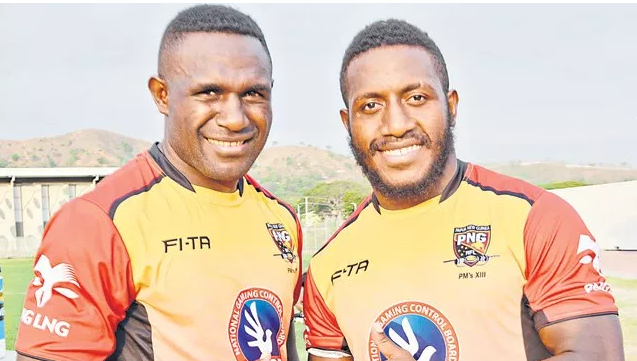 Hunters chairman Graham Osborne said the club would be losing seven of their squad during last week’s awards but would not elaborate on who the players were but said the announcements would be made in due course. The loss of the Boas brothers will be a huge blow for the Hunters, with the 2017 champions missing out on the finals this season.
However part of the Hunters programme has always been to develop the country’s rugby league talent and give them the opportunity to play in the Q-Cup as well as being picked up by other clubs in Australia and England.
Hunters and Kumuls coach Michael Marum said he was aware of the deal last month and while he wished the pair the best in England admitted he would have a hard time replacing them.
“I was told about the deal last month. This is good for Ase and Watson, for their careers,” Marum said yesterday.
“It’ll allow for others to come through the Hunters programme but having said that, we will have a tough time getting quality halves to slot straight in. We’ll have to identify the talent from around the country and the Digicel Cup and bring them in and develop them over time.
“We’ve got senior guys in the Hunters squad who can step in but at the end of the day we’re losing some great talent,” he said.
Ase, 29, and Watson 23, were instrumental in the Hunters’ 2017 grand final success and have both featured for PNG in the halves over the last three seasons. Ase was also named the Q-Cup’s best player in 2017.
The older Boas also featured in the 2013 World Cup and both were part of PNG’s gold medal-winning nines team at the 2015 Pacific Games.
Rovers general manager Davide Longo said the club was excited about the acquisition.
“We are very excited to announce the signings of the Boas brothers.
They are two hugely talented players who have experience of winning and playing at an elite level.”
“This is only the start of our recruitment for the 2019 season and there will be more reasons for supporters to be excited.”
The brothers are due to arrive at Featherstone in January.
The signings come after Rovers coach John Duffy fielded only 14 players in their 22-4 Championship Shield win over Leigh Centurions.
SHARE THIS
Share it Tweet Share it Share it Pin it