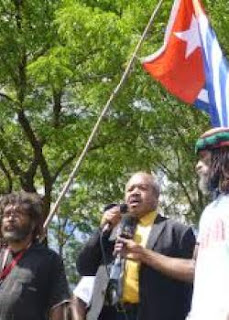 “It is important that we talk about the West Papua issues with the Indonesian Government and at the international forum,” he said.

“We have to address it openly and maturely. And I would like to see an open and mature type of discussion to take place.”

Parkop was responding to Pato’s ministerial statement in Parliament Tuesday. “We are supposed to have a robust relationship with Indonesia because they are our immediate neighbours,” Parkop said.

“We should have integrated our economy. We should have closer people-to-people relationship. After all we are two countries sharing a land border.

He said the leadership of Indonesia under former President Susilo Bambang Yudhoyono was open.

“But now we have a President Joko Widodo. We are not sure of his leadership on the West Papua issue.”

He said he had always supported what the West Papuans were fighting for.

“I have strong points about it,” Parkop said.

“It has been part of my life and I want us to progress it to a point where it has an outcome that is good for Indonesia and us, good for the people of West Papua.”

He was commenting on a ministerial statement made by Foreign Affairs and Trade Minister Rimbink Pato.

“We have been able to save the lives of the border-crossing boat people who were sailing to Australia — all the young children, babies could have been thrown into the sea,” he said.

“Well over 3000 people had faced drowning. We offered a lifeline. That is why we open up the asylum camps in Manus for them. And today many of these families are being resettled in the United States and other parts of the world. That is because PNG has taken a leadership role on refugees in the region. When everybody else in the region didn’t want to accept these refugees, PNG went out of its way to accept them.”

“Many of them have been living in our country for over 30 years without any citizenship. And we, as the Government and country, gave them citizenship by wavering the K10,000 (US$3,000) application fee,” he said.