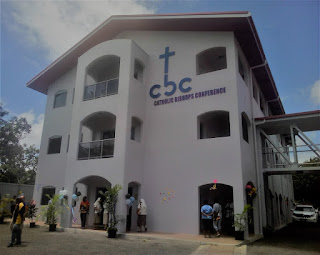 In a small but significant event held on the ground floor of the new building: CBC staff members, the media, and distinguished guests like PNG’s Founding Father and the Prime Minister were also present to witness the occasion.
Grand Chief Sir Michael Somare, the Founding Father of the nation, made mention in his speech that he had not expected the CBC building to be as magnificent as it was in its finished state.

“When we laid out the foundations of the building, I thought it wouldn’t be what it is now but it truly is magnificent!”

Prime Minister Peter O’Neil stated in his concluding speech that it was important for the government to support the work of the churches who were helping the country in spiritual growth.

“The churches and government must work hand in hand together to make sure that the people of PNG get the services they need,” said Mr O’Neil.

“Not only in education and health, but also in spiritual guidance as well which is the most important.”

The Building was estimated to have costed K12.22 million – K3 million of which the government had donated towards its establishment.

The CBC Building A has a conference room with a capacity of 100 people, 25 workstations and 11 living rooms; while building B has 50 workstations, 2 flats, and 5 living rooms.”

According to CBC General Secretary Reverend Father Victor Roche, there is also space for commission of communication such as a recording studio with the possibility of a future radio or television station.
SHARE THIS
Share it Tweet Share it Share it Pin it