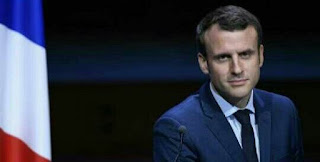 The French President wrote, “On the occasion of the National Day of Papua New Guinea, I am pleased to extend my warmest congratulations to you, both on my own behalf and on behalf of the French people.

“As a Pacific country through the presence of its local authorities in New Caledonia, French Polynesia and Wallis and Futuna, France shares a common vision of the challenges in Oceania with Papua New Guinea, particularly on the issue of combating the effects of climate change.

“As I recalled during the High-Level Dialogue on Climate Change and Biodiversity organised by the Pacific Community in Noumea on 4 May, France will continue to actively engage with island States to help them address the challenges of climate change.

“In this regard, I would like to tell you how pleased I was to exchange views on these subjects with Hon. Rimbink PATO, Minister of Foreign Affairs and Trade of Papua New Guinea, on the occasion of the Noumea meeting.

“Beyond climate issues, bilateral relations between our two countries have intensified in recent years. I particularly welcome the development of the liquefied gas plant project exploiting the natural gas fields of ‘Elk’ and ‘Antelope’ by the Total Group, whose potential is particularly promising.

“France, as you know, attaches great importance to the promotion of multilateralism. In this regard, I wish you every success in organising the APEC Summit to be held this year in Papua New Guinea in November.”

Sir Bob said the relations between PNG and France, through people to people contact, cultural and educational exchanges are being greatly enhanced through the recent interest by French companies to be involved in the resources development sector in Papua New Guinea.

He said France is a Pacific nation and PNG looks forward to consolidating the existing constructive relations that both countries enjoy as partners in the region.

“I express our gratitude to France for its continued association and support to the Pacific Islands Forum as a dialogue partner and the contribution of France in achieving some of the development aspiration in the region is much valued,” the Governor General said.