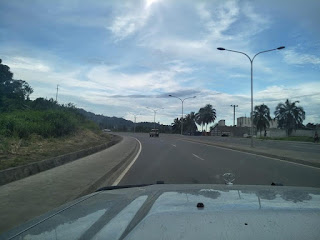 WORK on the second section of the Lae-Nadzab road has started after a review of the design, technical scope and costs were completed, says Works Secretary David Wereh.
Wereh, in an update on the K600million road in Morobe, said contractors had already started work.
“We have instructed the contractor to start work on section two from the Wau-Bulolo junction to the Yalo Bridge,” Wereh said.
“We stick within the prior government approved ceiling of K600million to deliver the road from the Bugandi roundabout all the way to Nadzab junction. This will eventually link up with the Highlands Highway which is starting at the same place.”
China Railway International was awarded the contract for the second phase of the four-lane highway construction at a cost of K135million to be funded fully by the Government.
The company successfully completed phase one from the Bugandi roundabout to the Wau-Bulolo turnoff – a distance of nine kilometres.
The company’s deputy general manager Mu Guoli said construction of phase one was completed on time and in accordance with PNG and Australian road standards and specifications.
SHARE THIS
Share it Tweet Share it Share it Pin it