8/22/2018 Headlines, Sports
Papua New Guinea rugby league star Justin Olam will be making his second NRL appearance when the Melbourne Storm clash with the Titans at the Cbus Super Stadium on the Gold Coast, Queensland on Saturday. 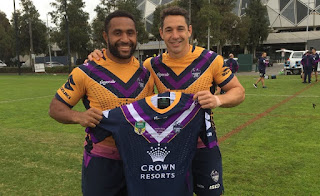 Olam, who made his debut against the St George Illawarra Dragons in May this year, will be replacing star centre Will Chambers, who was cited for a grade three dangerous contact play for his tackle on Jarryd Hayne of the Parramatta Eels at the AMMI Park last Friday.

Chambers will miss three games with an early plea but faces a five-game suspension if he challenges and is found guilty.

He is among other star players who add to Melbourne’s injury woes. They include winger Suliasi Vunivalu (hamstring) who will be replaced by Cheyse Blair.

On his debut against St George Illawarra Dragons in early May this year, Olam said: “It’s been a long wait, but finally last weekend, I made my NRL debut against the Dragons in Sydney when Young Tonumaipea was unfortunately injured during training.

“I have always placed high expectations on myself and it’s one of the reasons I think I thrive at the Storm, as they have the highest expectations of their players. Some of the greatest players to ever put on a pair of boots are here, training and playing for this club.

“It was amazing playing alongside Billy Slater. He was definitely one of my heroes growing up. I like him as a bloke both on and off the field. When I first came to the Storm, I was a bit nervous. But from the moment I arrived, he talked to me and made me feel welcome.”

Olam is the second player from Papua New Guinea to be part of Storm after club legend Marcus Bai.

His first season in Melbourne was spent developing his game at feeder level, scoring 15 tries and averaging more than 150 metres per game for the Sunshine Coast Falcons.

Olam will continue pushing for first grade opportunities this year.