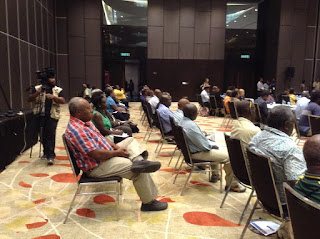 He made these comments when speaking at the National Conference on the Bougainville Referendum this morning.
President Momis said that the Bougainville Peace Agreement is built around three pillars, AUTONOMY,WEAPONS DISPOSAL and REFERENDUM but the basic goal for each of the three pillars is the ending of the conflict.
He said based on these, the Referendum arrangements must be implemented in ways that ensure that both sides continue to pursue peace as a new weapon.

President Momis said that in the past both the Papua New Guinea National Government and the Bougainville combatants pursued their goals using violence.
They each aimed to defeat others through violence and in that way thought they could achieve peace.
But with the peace process a new motto was adopted which applies to all parties to the conflict it is peace by peaceful means.

He stressed that if lasting peace is the key goal of the Referendum, then we must use peaceful means in the way in which we implement the referendum arrangements that means both sides the former Bougainville fighters must agree not to use weapons of violence for PNG even if it refuses to ratify the referendum they must instead fold their arms and focus on talking and negotiating.