PNG FEMALE ARTIST OF THE YEAR: MEET THE VOCALS BEHIND “MEMORII” 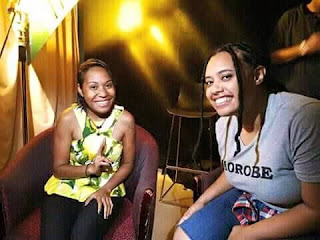 Who would have thought that the fusion between two completely different female artists with two entirely diverse styles would result not only in a smash hit, but one of their biggest achievements on the local music scene!

In an unforeseen but gratifying moment, Rii’Kah and Ya’Nerle snatched and took home with them the “Female Artist of the Year” Award on Saturday night during the 14thYumi FM PNG Musik Awards at Lamana Gold Club, Port Moresby.

Ericka Robert, 26, from a mixed parentage of Morobe and Milne Bay province; and Yanerle Kimmins, 23, from a mixed origin of Morobe, Milne Bay and Central provinces, are the famous and outstanding vocalists behind the 2018 local smash hit ‘Memorii’.

To their families and friends, they go by Ericka and Yanerle, but to the rest of country, they are Rii’Kah and Ya’Nerle respectively.

In 2015, both female powerhouses were contestants on EMTV’s Vocal Fusion singing competition where they had apparently met and became good friends.

“After I got eliminated from the show, I joined the vocal fusion band as a backup vocalist and I’ve been with the show for 3 years and 5 seasons now,” said Rii’Kah.

“There, I met Toxicmahn and Bata Bin who introduced the song Memorii to me, we rearranged it and asked Ya’Nerle to rap in it as well.”

The song Memorii was recorded last year and released in December 2017 as their first ever single.
“The song became an instant hit and was on the Top 20 Yumi FM Countdown and within just three weeks, it became number 1.”

“We were even surprised when we got a phone call from Yumi FM informing us that we were nominated for the YUMI FM PNG Musik Awards.”

Both female artists were definitely not expecting the song to be a hit, let alone, taking home the 2018 Female Artist of the Year.

“We never expected an award but we are beyond grateful to our fans and to PNG for believing in us and voting,” said Rii’Kah.

Ya’Nerle said her music career was a little non-existent before the release of Memorii.

“I had done a couple of songs here and there but those songs are nothing compared to the current hit song that I collaborated with Rii’Kah.”

“Many of us are busy raising our beautiful children, some are single working mothers or helping to keep our families in order, but to represent the beautiful women of PNG is a complete honour that Rii’Kah and I are thankful for” said Ya’Nerle.

The remake by Rii’Kah and Ya’Nerle, which is a more upbeat rendition, was rearranged and reproduced by Emmanuel Muganawa, better known as Toxicmahn, under his production label, Panakatsu Studios.

The song is basically about a man leaving his woman for another and is sung in a variety of languages: English, TokPisin, Roro (Kairuku language of Central province), and Kewabi (Ialibu language of Southern Highlands province). PNGFM
SHARE THIS
Share it Tweet Share it Share it Pin it