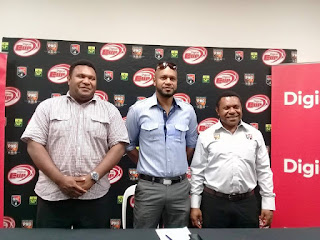 The Oil Search National Football Stadium (NFS) is now the official venue for all Digicel Cup matches, starting from round 5 up to round 18 and onwards whether it be a single match or a double header match.
This announcement was made after negotiations made by Oil Search NFS and PNGRFL.
Stanley Hondina PNGNRLC head, said it is a good indication as far as capacity building is concern and he thanked PNGRFL and Oil Search for the initiative.
Mr Hondina said, “We will make sure that the facilities and also the game on the field is maintained at a standard which is good for supporters.”
‘’The standards of the game remains and therefore we expect the conducts of the teams and spectators to be lifted," said Mr Hondina.
In response, Lee Pokarop the General Manager for NFS said the venue belongs to the people of PNG and has a rich history of great matches and events not just of ruby league but other sports in its former days as PRL.
‘’We believe success breeds success and therefore it is going to boost our sports man and women not only just in the code of rugby league but it sets a path for other sports to follow,” said Mr Pokarop.
OSNFS is a world-class stadium and to have both the SP PNG Hunters and the Digicel Cup competition matches to be held at the stadium is truly a great advantage not only for players but for spectators as well.
SHARE THIS
Share it Tweet Share it Share it Pin it