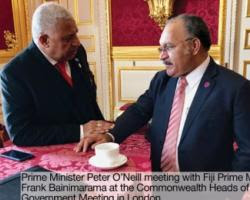 He said the effects of climate change, particularly on vulnerable island nations, could not be stressed enough.

O’Neill told the Commonwealth Heads of Government Meeting in London that the countries were faced with extreme weather conditions brought about by climate change.

“Extreme tropical storms, and unprecedented drought, are devastating our communities,” he said.

“PNG reaffirms our commitment to the Paris Climate Change Accords, and the Talanoa Dialogue.

“These are commitments that should form the basis of real global action – to make sure there is effective preparedness and help countries to adapt to the new world which climate change is affecting all of our lives.

“But sadly, often action has not followed words from these global forums.”

O’Neill said adequate funding mechanisms had been established, but funding had not followed the pledges.

“The developing countries did not cause climate change but we are paying the price of this because of the industrialised nations who caused climate change,” he said.

“As an organisation, the Commonwealth must be a stronger forum for stimulating action on climate change. “Papua New Guinea fully supports the adoption of the Commonwealth Blue Charter, but we must ensure appropriate action and innovative funding processes are implemented.”

Meanwhile, Samoa's prime minister has welcomed the focus of the Commonwealth on vulnerable member states affected by climate change.

"As well we welcome the focus of the Commonwealth familty to acknowledge the most vulnerable of its members. In particular, the impacts of climate change on our small island developing states."

Tuilaepa acknowledged the Commonwealth working to foster a fairer, more prosperous and sustainable future for all.

Samoa is to host the CHOGM conference in 2022.