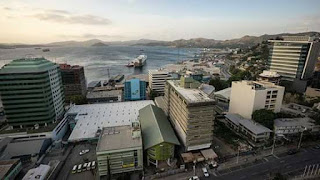 THE Government, in a bid to have its own buildings, is working on a proper system of managing leases to make savings over time, Chief Secretary Isaac Lupari says.

Lupari said the Government planned to have its own buildings through the “build, operate and lease and transfer” process.

“This is an industry that is costing the Government almost K300 million,” he said.
“That is what the State is paying for leasing government offices throughout the country.”
Lupari heads the government office allocation committee which is meeting every week to make sure “we put in a proper system of managing our government leases”.

“One of the directions given by the Government is to have our own buildings constructed,” he said.
“We have taken advertisements in the last three weeks calling for expressions of interest.
“We are asking for people with money to come and build on a build, operate, lease and transfer basis.
“Government wants, over time, to own those buildings. This is why we have been meeting.”
A report tabled in Parliament recently revealed that the government office allocation committee did not follow proper processes when engaging a firm to build a 32-floor office complex in Waigani.
The report followed an investigation by the Ombudsman Commission.
Lupari said the committee would give an update on the issue once they had finished all the work.
“Often our people complain and rightfully so that public service is too costly,” he said.
“It is a monster eating so much money.” Post courier/one png
SHARE THIS
Share it Tweet Share it Share it Pin it