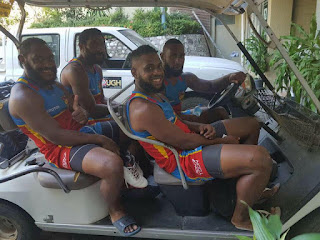 Port Moresby, 05th April 2018 - The Kroton Wigmen will be wearing a black arm band for its season opener against sister team PRK Mendi this Sunday at the Late Joe Kevieme Oval in Mendi. It has been a turbulent past 4 weeks for us starting with the magnitude 7.5 earth quake that struck Hela, SHP and parts of Enga, Gulf, Western Province and East Sepik Province where lives have been lost and properties destroyed. Over the weekend tribal fights escalated in the heart of the Provincial capital in Tari, resulting in further loss of lives. These are trying time for us, having to represent a province that is torn by natural and manmade disasters. We have been struck to our cores but our society has been one that has evolved over time and we will get the better of it as we re-gather and come out of these calamities. We will put those issues behind us and for once, we will play infront of our people to give something back to them through rugby league as a launching pad to provide the inspiration and hope for a better future ahead despite these problems that are staring at us. There is no better way than to play our sister team in Mendi for our season opener.
We will be wearing the black arm band this Sunday, to signify that we are still in mourning for the lives that have been lost. Not all hopes have been lost as we believe that there is always something better at the end of every bad situation. The black arm band is to remind everyone that we have to stay together in these trying times and raise up together despite the miseries with are challenged with.
Wigmen Board has released their final playing squad for 2018. The list is made of both experience and youth. We need the right balance in the squad for the experience to rub off to the fresh faces. There are few new players we have recruited directly from Hela leagues among others to bolster our squad to be competitive. We had to release some of our older players either due to fitness or disciplinary reasons. We still have the depth within our squad to be competitive.
The full squads are;
1. Elvis Ayako (Muruks) Hela
2. Melvin Paul (Wigmen)
3. Stanford Talita (Wigmen)
4. Daniel Tapol (Mioks)
5. Nicky Kili (Wigmen)
6. Benton Lame (Pom)
7. Benjamin Hetra (Wigmen) Hela
8. Warren Glare (Wigmen)
9. Raymond Tia (Vipers) Hela
10. Ham Tina (Vipers)
11. Joel Muna ( Wigmen) Hela
12. Messac Wellen (Wigmen)
13. Junior Mel (Pom)
14. Benard Lama (Tigers)
15. Nickson Kolo (Muruks)
16. Richard Tuawo (Lae)
17. Joel Tagobe (Wigmen) Hela
18. Tom Opera (Tari league)
19. Paul Nelson (PNG 7's )
20. Valentine Culligan (UPNG)
21. Andy Tia (Tari League)
22. Junior Leo Tagobe (Tari league)
23. Kewa Kili (Mendi Muruks)
24. Stanley Olo (Gurias)
25. David Joseph (Wigmen)