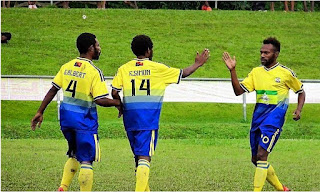 Injury woes are concerning for top NSL team Totti City FC with several key players down with injuries as the teams prepares for their round 6 fixture this weekend.
Coach Peter Gunemba revealed that Emmanuel Simon and Ronald Warisan have been confirmed to be injured, Nigel Dabiniyaba is out of the country whilst Solomon Island intake Andrew Rarangia has returned to Solomon following his sports visa expiring.
“Andrew will take two weeks off to sort his visa before returning in two week’s time,” said Gunemba.
However, this will not hinder their performance Gunemba said, as he is confident, they have a solid team and will deliver what is expected.
“We still have Captain Raymond Gunemba, Jacob Sabua, Obed Bika Mattew David and Try Gunemba who will hold the team," he said.
He added that having returned from the OFC Champion’s league in Vanuatu, Totti City FC is prepared for remaining games in the National Soccer League anticipating to win all to boost team spirit in preparations for the Champions league quarterfinals. PNGFM
SHARE THIS
Share it Tweet Share it Share it Pin it