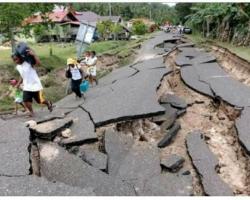 Papua New Guinea Prime Minister Peter O’Neill says the economy will be hard hit by the closure of the PNG LNG Project in Hela after Monday’s 7.5 magnitude earthquake.

He told The National in Mt Hagen after an unsuccessful attempt by helicopter to reach Tari in Hela and Mendi in Southern Highlands that the closure of the oil fields and the gas fields “is a concern to every one of us”.

The National Executive Council is having a special meeting today to discuss how to address the disaster.

O’Neill returned to the Kagamuga Airport in Mt Hagen Tuesday after the helicopter carrying him to the earthquake-hit areas was forced to turn back because of bad weather.

“They’re already on the ground and making assessments. By this evening (last night), we should have a full report of the damage that the earthquake has done in Southern Highlands, Hela, Enga and Western.”

O’Neill said it was a natural disaster which could not be blamed on anyone.

“It’s unfortunate, given that the economy is slowly recovering after the challenges we have been facing for many years,” he said.

“The economy is starting to turn around, the commodities are starting to pick up, and now we are given this challenge.

“We just have to work harder, persevere, and make sure that our people’s lives are not disrupted.

“We want to make sure that our schools, roads and hospitals are open so they can continue to serve our people.”

O’Neill said he had received reports of the gas and oil fields removing non-essential staff, particularly at Kutubu and Hides.

“It is mainly for their safety until it is determined whether it is structurally sound for them to open the gas fields and the oil fields,” he said.

“In Ok Tedi, the damage is not as bad as it has been reported. I got a report from the managing director of Ok Tedi this morning.

“There has been some road slippage and blockage of access to the mine, but I’m told that they’re clearing that, and the mine should resume sooner than we anticipated.

“The closure of the oil fields and the gas fields is a concern to every one of us.

“It will have a huge impact on our economy, but we will work with experts to see if we can get it operational as quickly as possible.

“We are getting regular reports from ExxonMobil, the operator of the gas fields, and from Oil Search for the oil fields.”

O’Neill said his helicoper went as far as Tari Gap before being forced to turn back because of bad weather.

“We turned back, tried to go towards Benaria on the other side of the mountains, all the way to Ekiko. But we turned around and came back,” he said.

O’Neill thanked companies such as Digicel and PNG Power which were working around the clock to restore communication and electricity in affected areas.