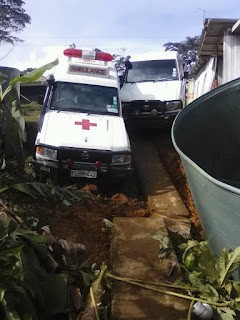 Geoscience Australia said the aftershocks had ranged from magnitude-5 to 6.3.

Monday's earthquake struck in the Southern Highlands province in the early hours of the morning, causing damage to buildings and landslides.

There are fears already-damaged buildings in towns like Mendi, the capital of Southern Highlands province which is home to more than 50,000 people, may not survive continuing aftershocks.

The director of PNG's National Disaster Centre, Martin Mose, said communication networks were down and that was making it hard to assess the impact of the quake.

“We would have expected widespread damage,” he told the ABC's Pacific Beat programme.

“There have been unconfirmed reports coming through of a number of deaths … and of course widespread damage.”

The Government said it was sending response teams including defence personnel to the affected areas.

“The Papua New Guinea Defence Force has also been mobilised to assist with the assessment and the delivery of assistance to affected people as well as the restoration of services and infrastructure,” Isaac Lupari, the chief secretary to the Government, said in a statement.

Airports and hospitals were among the infrastructure and buildings believed to have been damaged.

“In the place I'm from, Pangia in the far south, houses have collapsed.”

Part of PNG's northern coast was devastated in 1998 by a tsunami, generated by a magnitude-7.0 quake, which killed about 2,200 people.