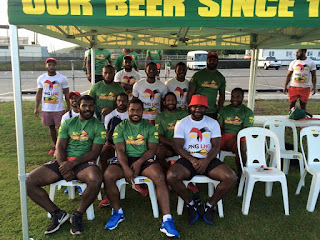 The SP PNG Hunters have started their preparations to defend their title as the Queensland Intrust Super Cup Champions. There’s been changes to the player roll call this year with a lot of new faces and an upcoming trail match with the Brisbane Broncos on the 24th of February.

This morning the SP Hunters had an Open Fun Day, an idea which was initiated in 2017 and was held again today at the Oil Search National Football Stadium. The idea is to meet and mingle with sponsors and partners, to get to know the people who will be supporting them in one way or the other in this year’s campaign.

The Open Fun Day is becoming an annual event for the SP Hunters players and coaching staff as well as sponsors and partners which started at 6am in the morning with a tour of the facilities at the Oil Search National Football Stadium than everybody took to the field with fun and games and culminated with breakfast. PNGFM
SHARE THIS
Share it Tweet Share it Share it Pin it