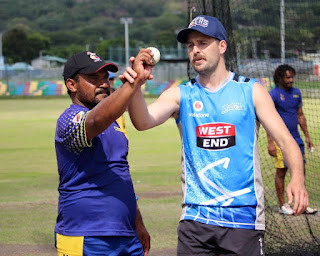 After playing a major role in the historic Big Bash victory on Sunday, Adelaide Strikers’ leg-spinner, Liam O’Connor jumped on a plane to Port Moresby to give a helping hand to the Hebou PNG Barramundis who are currently preparing for the ICC Cricket World Cup (CWC) Qualifier in Zimbabwe.
O’Connor who was selected for the Big Bash showpiece on Sunday after being on the sideline for the entire Big Bash, took 0/27 off his allotted four (4) overs to help the Adelaide Strikers win their maiden Big Bash title after defeating the Hobart Hurricanes by 25 runs.
“To be on the sideline all season and to be selected for the grand final is absolute quality. I guess all the boys worked really hard. There were plenty of overs bowled in the nets and it was good to get some reward at the end of the tournament and guess prove some of the doubters wrong,” said O’Connor.
O’Connor got the opportunity to fly to Port Moresby to assist the Hebou PNG Barramundis’ in their preparations for the ICC CWC Qualifier through the Adelaide Strikers’ Assistant Coach and newly appointed Cricket PNG National Coach, Joe Dawes.
“Obviously Joe Dawes being the new coach and assistant coach for the Adelaide Strikers posed the idea to me and I thought that it would be a great opportunity to go somewhere different and work with different players,” said Dawes.
Although O’Connor had not travelled to PNG previously, he played against the Hebou PNG Barramundis in the Maroochydore a couple of years ago when he was a rookie player for Western Australia.
“I didn’t know a whole heap (about PNG) but I did in fact played PNG in a Matador Cup trial game in Maroochydore a couple of years ago. That was all the extent I know about PNG. I remember the PNG boys going hard in a rugby game in their warm up over there but I did a few Google searches and spoke to Joe about PNG before coming up. I didn’t know too much, I was all new but I guess that adds to the excitement I guess,” said O’Connor.
O’Connor and Dawes landed in Port Moresby on Tuesday and went straight to Amini Park for the Hebou PNG Barramundis training session.
“The team cohesion and how everyone is like a family has been very impressive. They have this real eagerness to learn which is very genuine. That makes it very easy to teach and give advice when they are all willing to learn. It has been really good,” said O’Connor.
O’Connor believes that the Hebou PNG Barramundis have a chance at the upcoming ICC CWC Qualifier.
“I cant’s say I know a lot about the backgrounds of the other teams, but they will obviously be playing tough teams like the West Indies and Afghanistan, but the boys seem to be putting real hard in training and these upcoming practice matches will help them massively in putting their best foot forward,” concluded O’Connor.
O’Connor will depart Port Moresby tomorrow with the Hebou PNG Barramundis where they will be based in Brisbane for a week-long camp, playing a couple of practice matches and trainings before travelling to Zimbabwe for the ICC CWC Qualifier.
Liam O’Connor is a 24 year old leg-spin bowler from Perth, who was previously contracted with Western Australia and currently plays for the Adelaide Strikers in the Big Bash League in Australia.
SHARE THIS
Share it Tweet Share it Share it Pin it