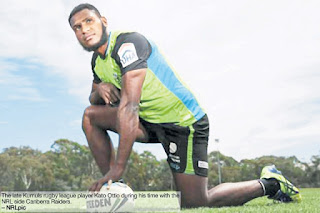 A MAN accused by a group of villagers of practising sorcery which they claimed led to the death of rugby league player Kato Ottio was rescued by police yesterday and saved from being tortured.
Four police officers were injured when they went to Tatana village in Port Moresby early yesterday to rescue the man, according to National Capital District Metropolitan Superintendent Perou N’Dranou.
He warned Ottio’s relatives at Tatana not to take the law into their own hands as the case of his death was before the court.
“I urged the families, relatives and villagers of Tatana to refrain from any sorcery allegations as there is no scientific evidence to prove that the suspected person was a sorcerer,” he said.
According to a preliminary report N’Dranou received late yesterday, a police unit was called to Tatana at around 8am to investigate a report about a man about to be tortured by the villagers.
“They were alleging that he was the cause of the death of the late rugby league player Kato Ottio,” he said.
N’Dranou said the villagers wanted the man tortured to force information out of him on how Ottio died.
“But with the help of the village leaders, a police unit went in and rescued this person from the village,” he said.
Ottio, 23, died on Jan 9 at the Pacific International Hospital after collapsing while on a road run. He had earlier been attending training with the PNG SP Hunters.
A doctor who treated him at PIH said he died of heat stroke.
N’Dranou said yesterday the injured police officers required medical attention and were taken to the Port Moresby General Hospital.
Their vehicles were stoned and damaged.
N’Dranou said government and non-government organisations had been telling the people that there was no such thing as sorcery anymore.
“The law would not accept it and police would not entertain allegations of sorcery anymore,” he said.
“We have leaders, elders, and educated people in Tatana who understand that sorcery is no longer a crime in this day and age because there is no scientific evidence to prove that one person can cause death to another person (through sorcery).”
N’Dranou said the people of Tatana should allow the law to take its course.
“Let us allow the coroner to make its final decision or finding on the cause of the death rather than attacking an innocent person,” he said.
He said they were keeping the man in police custody for his safety.
In a separate case, he will also be questioned over a rape allegation. The National / ONE PNG
SHARE THIS
Share it Tweet Share it Share it Pin it