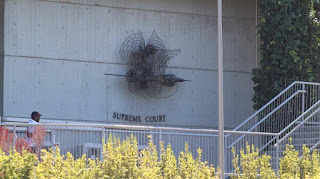 Two election petitions have been dismissed by the National Court in Waigani last week.

The court dismissed the petition challenging the win of Jimi MP Wake Goi.

The petition filed by runner-upm Mai Dop, was ruled incompetent.

Mr Dop, through his lawyer, argued on the grounds of illegal practices by the first respondent, Mr Goi in all polling places in the electorate, and failure by the Returning Officer to seek direction from the Electoral Commission to set aside ballot boxes from a number of polling venues.

Mr Goi, however, argued that the petition was not filed in compliance with Section 208 (a) and (b) of the Organic Law on National and Local Level Government Election.

Justice Elenas Batari, stated that Section 208 must be strictly complied with.

He then ruled the petition incompetent, as it did not comply with the requirements of the 2017 election petition rules.

Petitioner, Francis Potape has indicated that he will be filing an appeal at the Supreme Court.