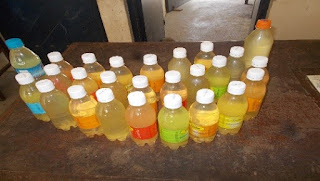 Police in Kirakira, Makira-Ulawa Province have arrested a 46-year-old male at the Kirakira main market for allegedly brewing and selling of home-made alcohol locally known as honey wine, on 15 January 2018.

It is alleged the man produced the alcohol as a source of income.

The man has been charged for Restriction of Making Liquor and illegal selling of Alcohol under the Liquor Act and released on bail to appear before Eastern Magistrate Court in Kirakira later this month.

Provincial Police Commander (PPC), Makira-Ulawa Province, Superintendent Peter Sitai says, “I want to remind the general public in the Province that producing liquor without a license from the Minister responsible is illegal.”

PPC Sitai says, “I encourage all members of the community to cooperate with the police and report anyone producing and involved in the sale of alcohol without a license to your nearest police station.”

Mr Sitai adds: “People are encouraged to consider other sources of income including marketing of garden produce, selling cocoa, copra, and milling of timber.”