Nakin acknowledges music for contribution to Peace on Bougainville 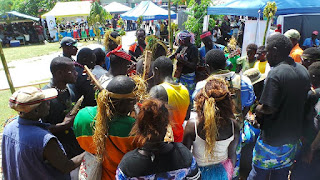 The National member for North Bougainville, WILLIAM NAKIN says this year’s YUMI WAN FESTIVAL is appropriately themed UNITY IN DIVERSITY as in realily we may be different yet we are one.
Speaking at the official Opening ceremony of the Festival yesterday, MR. NAKIN commended the festival committee for initiating the festival as an activity by various Bougainville artists to promote a serious sense of unity in what used to be a very disunited Bougainville.
A Bougainville full of fear, mistrust and hatred for one another as a result of the TEN YEAR Bloody Bougainville Conflict.
He said your songs, your music has had a powerful effect in the way the people behave, especially towards the unification process on Bougainville.
He also mentioned past such initiatives and collective efforts by many that has paid peace dividend over the years.
Meanwhile, One Bougainville ex-combatant, ISHMAEL TOROAMA performed some unity songs with his group yesterday whilst many continued today and will continue to Saturday.
Groups came as far as Central Bougainville, Kunua/Kereaka and Buka island.
New Dawn FM will continue to promote the festival until the closing ceremony on Saturday. Source: New Dawn FM
SHARE THIS
Share it Tweet Share it Share it Pin it