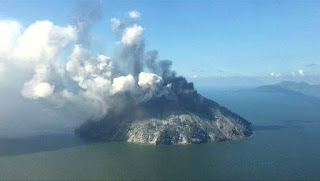 Close to six hundred Kadovar islanders in East Sepik Province have been evacuated from the island.

East Sepik Governor Allan Bird says the people have been moved to nearby Ruprup Island.

Mr Bird commended two councilors on the Island who had organized the evacuation over the weekend.

They managed to evacuate 591 men,women and children without any outside assistance.

"So I want to make special mention of those two for their leadership on the ground and for the cooperation that everyone was able to show which resulted with no casualties.

The evacuation follows a renewed spewing of smoke and ash last Friday, from the volcano on the island that has been dormant for many years.

Meantime Governor Bird, says food and water supplies will be delivered to the evacuated islanders.

He says with close to 600 evacuated from Kadovar Island plus those on Ruprup, the Government will need to feed approximately 2000 people.

"There's food been organized by the prime minister's department.

"They've run out of water on Ruprup because the 1,300 people on Ruprup, that island can only support the certain number of people, and in about the last 5 or 6 days with all 600 odd people from Kadowar, food and water has already run out on the island so our immediate priority is to try to get the landing craft out there with food and water within the next 24 hours and we are working on that now.

"We are hoping to get enough food for say 2000 people for maybe two weeks.

And within that time we have to come up with an action plan to evacuate all three islands."

Plans are underway to have islanders on the Schouten Islands in East Sepik Province permanently resettled along the coast of Turubu.

Governor Allan Bird says this will include Kadovar, Ruprup and Biem, which are all volcanic islands.

Mr Bird adds that the Provincial Administration and relevant stakeholders are now working on a relocation plan to have these group of islanders moved to the safety of Turubu, east of Wewak town.

"The advise from the Rabaul Volcano Observatory is that given the shallowness of the area and the type of volcano that Kadovar is, it is likely to cause a tsunami when it explodes.

"Given the over population of the island the plan is to relocate to the coast on the mainland at Turubu.