Government blamed for collapse of bridge 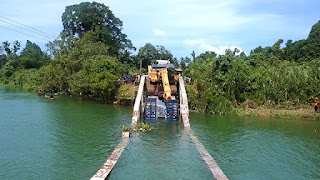 The National Government and the Department of Works are being blamed for their lack of action, resulting in the collapse of the Surumarang Bridge at Banab, in the North Coast of Madang Province.

Geoffrey Dubun a former engineer with the Department of Works says the demise of the bridge could have been avoided, if the government had responded positively to several submissions to repair the bridge 13 years ago.

The bridge situated on the mainland in the Sumkar District, collapsed on Friday, due to excessive weight, when a semi trailer truck carrying an excavator tried to cross over.

Speaking on the local radio station, NBC Madang, Mr Dubun says, the bridge, which is about 60 years old was only waiting to collapse.

He says civil engineers, including himself, have done several inspections on the bridge and discovered several defects, the foremost being the fast corrosion of the truss which is directly exposed to salt water.

Mr Dubun further states that it is no use crying over spilt milk and is urging the government to immediately start work on constructing a new bridge, or to consider opening up an alternate route further inland whilst waiting.

Since the collapse of the bridge the traveling public, especially those from Bogia, parts of Sumkar and Middle Ramu, and Angoram in East Sepik who frequent Madang town to sell betelnut, have been paying extra money to cross the Surumarang Bridge with their loads.

The same applies to cocoa and copra farmers from Bogia and Karkar Island.

The Department of Works has meantime organized a bailey bridge from Lae to be used as a temporary access.